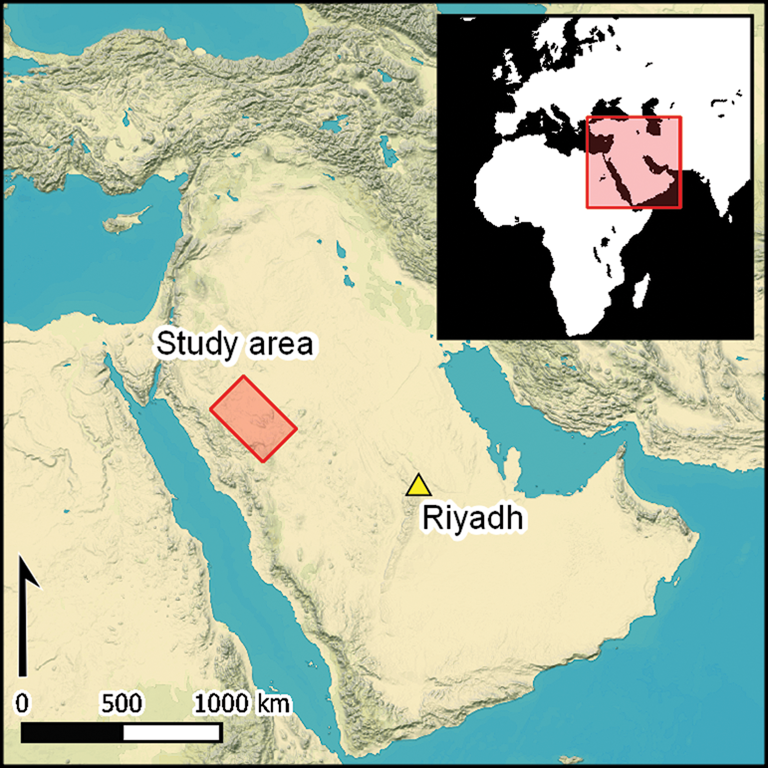 Older than Newgrange, Stonehenge, and the Pyramids of Giza, these structures date to 5,000 B.C.E. Archaeologist Melissa Kennedy argued that they mark the earliest, large-scale monumental ritual landscape, yet found.

Other ancient monumental structures have survived throughout the Arabian peninsula. These other structures include burial cairns, pendent tombs, tower tombs, and monumental animal traps. Ancient peoples however only built mustatils in the northwest portions of that peninsula.

Ancient people built mustatils on varied landscapes. They built some on the slopes of volcanoes, others on flat areas. Hugh Thomas, Project Director, told Antiquity that mustatils do not align with cardinal points. Instead, they align with the lay of the land.

Archaeologists have found another related structure near mustatils. These other structures took the form of an I-beam. Sometimes as many as six of these I-structures occur near a mustatil. Archaeologists found clusters of up to 19 mustatils within 500 m (1640.4 ft.) of one another, suggesting a relationship.

Hugh Thomas in Antiquity identified several key components of a mustatil: a head, a courtyard, long walls, and a base. The head, the base, and the long walls bounded the courtyard.

For #MustatilMonday, here is a group of three lovely examples, out of the >1000 identified by @aaksa_project pic.twitter.com/5VaLLjQVmA

According to Phys.org, the mustatils are made of sandstone. They have an entrance on one end (the “base”) and a platform on the other (“the head”). Rubble comprises the “head.” On a hill, ancient people would have placed the head of the mustatil higher up the hill than any other part.

A narrow entranceway characterizes the base. The entranceway varies in length from 0.3 m (0.9 ft.) to 0.8 m (2.6 ft.). It stands opposite to the central chamber.

Thomas identified two types of mustatils. The simple type has a head, a base, long walls, and a courtyard. Complex types have the same features as simple types, but they also have entranceways and standing stones. I-structures are only associated with complex types.

Archaeologists have found no human remains or evidence of nearby human dwelling. Nor did they find any evidence of human burial.

Evidence for a cattle cult

Like many ancient structures, mustatils have suffered from looting or other damage. In 2019, a team of archaeologists and other researchers excavated an undamaged mustatil. In the central chamber, they found the bones of mostly cattle, but also sheep, goats, and gazelles.

The remains had been placed before the standing stone. The low height (0.3 m to 1.2 m) of the mustatil’s walls precluded its use as an animal pen. Due to the placement of the faunal remains around the large standing stone, archaeologists interpreted them as offerings. Radiocarbon dating of these bones returned a time in the late Neolithic, 5999 to 5000 B.C.E.

Thomas hypothesized a processional component to this ritual based on the narrow entranceway. Some entryways would only allow one person at a time to pass through. They would then move towards the head of the mustatil. The courtyard would have to be large enough to accommodate the celebrants.

Nearby and dated to the same time, archaeologists had found decorated rocks. Someone in the past had inscribed images of cattle herding and hunting on those rocks. These petroglyphs would be consistent with a cattle cult.

Almost nothing has survived from the culture that built these mustatils. Nothing is known of its pantheon, cosmology, or social structure. Compared with this mustatil culture, the beliefs of the Iron-Age Gauls are well-documented.

The current climate of the region does not support cattle herding suggesting it was more humid in the past. Moreover, no one knows if the builders of the mustatils are genetically or culturally linked to the current inhabitants of northwestern Saudi Arabia. Everything known about that mustatil culture has been inferred from its surviving material remains.