TWH – From April 9 through April 12, the Grey Faction of The Satanic Temple (TST) hosted, an online conference, “The World Congress on Moral Panics: Conspiracism and Pseudoscience in the Age of QAnon.”

Moral panics refer to a common type of demagoguery to enforce social conformity and The Wild Hunt previously suggested that they were on the rise and news to watch after then-recent events. Examples of moral Panics include pogroms, McCarthyism, and Satanic Panics, as well as literal “witch-hunts.”

The recent events regarding Lil Nas X and the Satanic shoes that contained a “drop of human blood” and a pentagram sparked a predictable outrage from some Christians.  Pastor Mark Burns, for example, tweeted soon after: “This is evil and heresy and I pray that Christians rise up against this.”

TWH columnist, Storm Faerywolf offered a much different understanding of the “satanic” shoes.  The shoes have since been removed in an agreement with Nike after a lawsuit. 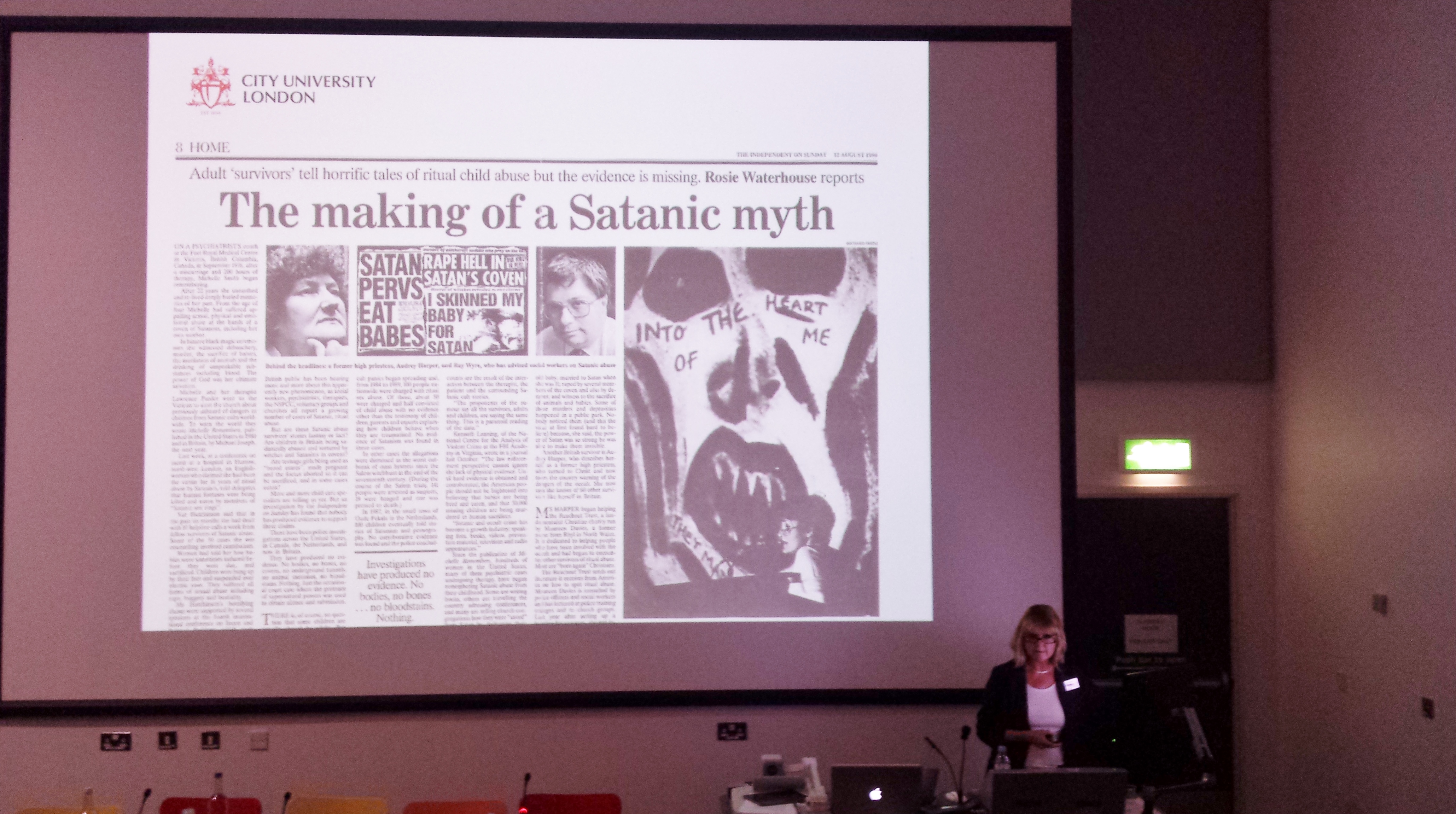 1) A group, idea, or condition is defined as a threat to the “values, safety, and interest of wider society.”

2) The media sensationalizes the accusations, and frames the story as a case of villains vs. victims.

4) The government intervenes, framing the threat as symptomatic of wider social ills.

Moral panics occur across cultural and political lines including the U.S. Red Scare from 1918 to 1920 and McCarthyism in the 1950s, as well as the Stalinist and Maoist purges in Europe and Asia.

By Cohen’s definition, a moral panic assumes that “villains” are harming “good people.” Only moral entrepreneurs recognize these “villains” for the existential threat that they are. The entrepreneurs take it upon themselves to alert the public. Then they organize their “defense.” The panic reinforces a moral position. In this process, the entrepreneur enhances their own ego and power.

Investigative journalist Mike Rothschild has studied QAnon extensively. He was on the panel, “Satanic Panic, QAnon, and Media Misconceptions.” Rothschild noted that if people believe they are immune to moral panics, they are leaving themselves more open to falling for them.

Assistant Professor of Religious Studies, Joseph Laycock discussed the question, “Is QAnon a Religious Cult?” In that session, he discussed brainwashing and mind control.

Laycock does not find the term “cult” valid or useful. He finds it more useful to compare and contrast QAnon with cults. Rather than a cult, Laycock sees QAnon as another in the long history of US conspiracy theories. He concentrated on the role of “mind control” in conspiracy thinking.

Laycock began by discussing the concept of “brainwashing” by referencing captured U.S. soldiers who became critical of U.S. policy. This criticism of U.S. policies was explained as a result of “brainwashing,” also known as mind control, or by the intentionally benign term, “re-education.”

The concept of brainwashing is echoed in the rise of perceived cults in the 1970s.  During that period, young adults began to explore religious groups arising from East and South Asia cultures.

Paganism also gained significant attention during that period of time. Parents became upset that their adult children were joining “strange,” minority religions. By the mid-1970s, a moral panic about “cults” had begun.

Parents accused some Asian-American religious groups of brainwashing their children as a way to make sense of their adult children’s spiritual choices.

This panic caused some social scientists and religious scholars to become alarmed. They saw this anti-cult movement as an attack on minority religions. As a result, people joining the “wrong” religion were not exercising free choice. Rather, they were mentally ill.

Laycock argues that assuming QAnon members are under some type of mind control allows them to escape responsibility for their actions. Brainwashing distracts people from understanding the processes whereby someone becomes more enmeshed in QAnon.

The Grey Faction of the Satanic Temple organized this Congress on Moral Panics. According to Lucien Greaves, the name alludes to the grey matter in the brain.

The group “consists of a worldwide network of volunteers from a wide range of backgrounds, including mental health professionals, journalists, researchers, and others committed to fighting pseudoscience.”  They challenge the intellectual underpinnings of Satanic panics.

The Grey Faction arms itself with psychological evidence and rejects the validity of recovered memory techniques in therapy. Those recovered memories have helped to fuel Satanic panics.

Cognitive Psychologists like Elizabeth Loftus, Ph.D., have long argued that memory does not act as a verbatim recorder. With each recall of a memory, a person can slightly change it.

Loftus, who was not part of the event, began her career challenging eyewitness testimony and police interrogation techniques. Lotus discovered that asking leading questions affected the answers.

Stated in a somewhat oversimplified manner, the retrieved memory will overwrite the original memory.

The consequence of so-called memory retrievals has been serious. In 1983 accusations against the McMartin preschool broke, which helped spark the Satanic Panic of the ’80s, for example. The accusations included the sexual abuse of 100s of children in Satanic rituals and the slaughter of animals. This story and these accusations were followed by similar accusations across the globe. Evidence was always lacking.

The state of California then re-charged Ray Buckley with 6 of the remaining 13 counts. The retrial resulted in another hung jury, and the state decided to not retry the case resulting in the charges against Buckley being dismissed.

The McMartin preschool case is one of the most well-documented and studied legal cases that have been widely been upheld as a cautionary tale for those in the legal profession and in journalism for the way it both traumatized scores of children and ruined the lives and careers of those involved in the case.

Coverage of the World Congress on Moral Panic and the Grey Faction continues next week in part II.