On the afternoon of August 16, 2019, family and friends quickly shared the news that Michael Thorn, Magus of Polyhymnia Coven, had joined the Ancestors earlier that morning.

Michael was a native of Long Island. Born in Greenlawn, New York on February 21, 1956. He would join a coven in the Gardnerian tradition in 1974 at the age of 18. He would later co-found the Path of Pentacle coven with Lady Cara who remembers his exceptional commitment to the Craft. She wrote in a brief remembrance “Michael was dedicated to the growth of the Craft. He was a man that traveled throughout the US and Europe working and sharing with many people of different traditions. He was well accepted in many communities. Magic in all its forms was his passion. He was gay, kind, thoughtful, and powerful. I’ve met few that could reach his level of knowledge. Working with him for 7 years was a pleasure. A piece of my heart goes with him.”

Lady Cara added, “He was a light for the Craft.”

Michael’s commitment to the Craft meant combating stereotypes about witches. He became a dedicated advocate and teacher about the Craft, publicly and powerfully.

In 1988, he would participate in an interview about Witchcraft published by The Daily Iowan. At a time when, as the report notes, individuals received death threats for being Wiccan, Michael joined other Pagan and Wiccan leaders in raising awareness about Wicca and Witchcraft. “Witchcraft isn’t all that secretive these days” he would be quoted as saying. “We’re looking for legitimization in the eyes of everyone else. There are many concerns that witches want to express, and we are doing this more and more these days.”

Michael communicated lovingly, shared that Wicca and Witchcraft were neither alien nor foreboding. In the same interview, he noted that, “We have very strong ethical standards and beliefs about not causing harm to anyone.” He added, “We feel that anything that you do, whether it be good or evil, will eventually return to you. If you really believe that, then it isn’t smart to do anything harmful.”

But he also made Witchcraft and Wicca familiar. “There is scientific evidence that some of the things we call magick do work. We’re not saying we have magic powers. We aren’t like Samantha on ‘Bewitched,’ ” he said. “Magick is not the reason people get into witchcraft, though. It is an integral part, but not the purpose of the religion.” Michael started Kathexis Anthropos Coven and Outer Court in New York City and served as its high priest. Kathexis was founded on a basic principle that “gay is good.” His coven would join Covenant of the Goddess after Samhain 1982 through the former Northeast  Local Council.

Michael served as a leader to multiple groups. He was an active member in both Covenant of the Goddess and the Pagan Federation International. He fought alongside other Pagan leaders for the right of Wiccans to perform marriages in New York City.

In 1986, Michael was elected First Officer of the Covenant and served through the following year. He became the First Officer to bear the cheerful title “Witch Queen of the Universe.” In the Encyclopedia of Modern Witchcraft and Neo-Paganism, Michael’s entry notes that he became “one of the more vocal proponents for a queer voice in the neo-Pagan movement.”

Michael continued his unwavering welcome and advocacy for LGBTQ people in the Craft. He led the group Witches and Pagans for Gay Rights in the New York City Gay Pride March. In an entry about Michael in Perspectives on the New Age, he is mentioned as a “gay man who heads an all-male gay Gardnerian coven in New York. The Craft gains strength from the brilliant and competent people who are driven away from ‘mainstream’ churches because of their sexual orientation.”

Michael also owned a store called The Sacred Space in the 1990’s. He recalled the struggle against discrimination. “There were constantly people calling the police saying that the store should be closed because of the type of store it was,” he said to Long Island Press. “There was one person who had a home business and a coven of her own and people were leaving rosaries on her mailbox. So, the bias unit was trying to figure out: Is this a bias crime? Is this a threat?” 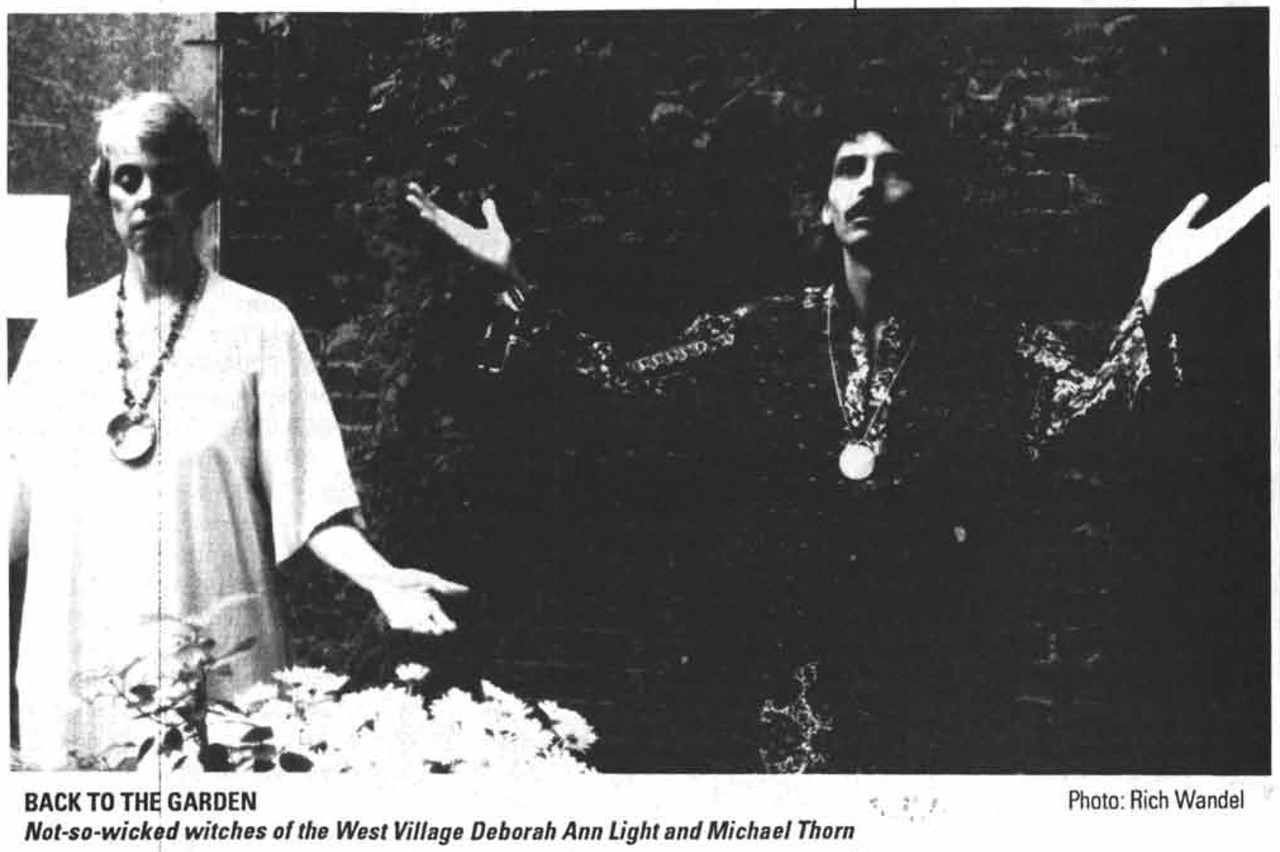 “Here in East Northport it’s a mixed bag,” Michael would add during the interview. “There have been people who have come into my store and asked whether we sell evil things or whether we worship the devil. There are people who won’t even enter this store because it has the name ‘wizard’ on it. Half the town absolutely loves us, and half of the town still believes stereotypes about us.”

Michael witnessed discrimination and sought solutions. His resolve for his interfaith work with colleagues in the Covenant strengthened over the years and he labored to build those important bridges.

In 1993, Michael participated in the 100th anniversary of the Parliament of World’s Religions held that year in Chicago. It was that year that the Craft gained interfaith prominence at the event with increased attention to Earth-based spirituality. Michael was instrumental in bringing the Covenant to the Parliament and engaging in interfaith work. The event was a described as a “coming out party for Pagans.” He returned energized and commented, “This was the most important event in the history of the Craft since the publication of Witchcraft Today in 1954!”

In 2015, Michael received the Covenant of the Goddess’ Award of Appreciation. In addition to his religious work, Michael attended Stony Brook University where he earned a BA in psychology. He later completed the nursing program at Agricultural and Technical College at Farmingdale and became a registered nurse.

Michael was elected president of the Coalition for Human Rights on Long Island; and later he became the founding president of the New York chapter of the Association of Nurses in Acquired Immune Deficiency Care. He worked at Brookhaven National Laboratories where he created and deployed the Health Promotion Program and received numerous awards from the American Heart Association.

Over the last 10 years of his life, Michael found strength and devotion in Spiritualism. He would often comment about the Spiritualist movement and visiting Lily Dale.

Michael is remembered by many in the Craft and the queer community as a groundbreaker and luminary who offered wisdom, comfort, and laughter through his generous spirit.

Michael passed peacefully in the early hours of August 16th, ready to move on. He is survived by his sister Jacquie, sister-in-law Eva, his dear friends Lydia, Carl, Rocco, Donna, Colleen, and his devoted Aide, Farrah.

Almost three decades ago, Michael wrote a ritual for healing and preserving the rainforests. In that ritual, he added these words that resonate with his crossing.

Tying the Cord, Renewing the Earth;

We are Her Children, bringing Rebirth.