We know many people set a new year’s goal for learning a new language. We start with the best intentions, and, just like losing weight, language learning means commitment, time and concentration, with the last two commodities  increasingly difficult to come by. But like any goal, this project can be tackled by breaking down the objectives into simpler pieces and recognizing both the frustration and the achievements inherent in the process.

The Lukumi religion tells us that Orisha Elegguá speaks all languages and as the trickster he is also the source of all frustrations around communication.  So, like in the Yoruba tradition, we first honor Elegguá before embarking on language learning, in this case, even exploring language learning.

For any objective, staying focused on small accomplishments is important. So, setting a goal like a basic everyday proficiency and understanding what that means helps keeps us on track, knowing that greater proficiency is possible with time.

The US State Department has done some of the leg work for us in terms of understanding the breakdown of language accomplishment. The School of Language Studies at the Foreign Service Institute has been offering language training to diplomats for over 70 years in almost 70 languages. They employ a questionnaire called The Interagency Language Roundtable (ILR) Scale (Language Proficiency Assessment).  The scales intend to categorize different levels of language proficiency. At the lowest level, elementary proficiency or “S-1” a person is generally able to address basic needs like “where’s the bathroom?” and respond on courtesy requirements like “please” and thank you”. S-1 level speakers usually have a speaking vocabulary but statements to them must be phrased slowly and perhaps with repetition. S-1 is achievable in just a few weeks.

S-2 level speakers go beyond those limitations and they are able to meet the demands of most social situations. They have a grasp of daily conversation but they may lack specialty vocabulary such as those found in technical subjects. They may require some repetition to understand conversation and their use of slang may not be proficient but they are intelligible.

S-3 level speakers have significantly increased proficiency. Their comprehension is usually complete at a normal rate of speech interaction and they have a professional level of comprehension and communication ability. Most importantly perhaps, their control of grammar and pronunciation is sufficiently comprehensive that they are not disruptive to conversations with a native speaker.  S-3 is the level needed for independent life within an area where the speaker is fully immersed in a new language.

S-4 level speakers have full fluency at a full professional capacity. While an S-4 would rarely be taken for a native speaker, their grasp of a language is enough that can hand informal interpretation to others. Finally, S-5 level speakers have native or bilingual fluency, possible capable of mimicking accents and easily navigate colloquialism, idioms and cultural references.

What perhaps is most interesting from the FSI is they also offer a categorization on the amount of time usually required for a student to reach S-3 proficiency. And it helps us break down our long-term goal in achievable pieces of time since we can have a sense of how much time we have to dedicate ourselves to learning the language..

The FSI  categorization is based on hours of instruction. So, Category I languages take the least time for a typical student, primarily an English-speaking monoglot- to reach ““Professional Working Proficiency.  The categories break down as follows:

Category I: 24 weeks or 600-750 hours of instruction. These are the “World Languages” which are more similar to English. The list includes Spanish, French, Dutch, Italian, Norwegian and Swedish.

Category II: 36 weeks or 900 hours of instruction. This list include German, Haitian Creole, Indonesian and Swahili.

Category IV: 88 weeks or 2,200 hours of instruction. These are the languages that the Foreign Service Institute’s School of Language Studies classifies as “’Super-hard languages’ – Languages which are exceptionally difficult for native English speakers.” The list is short: Arabic, Cantonese, Japanese, Korean and Mandarin.

They note theirs lists are not exhaustive- there are thousands of languages. They also list an important caveat “All estimates relating to the length of time needed to learn these languages to a Speaking 3/Reading 3 (S3/R3) proficiency level assume that the student is a native speaker of English with no prior knowledge of the language to be learned. It is also assumed that the student has above average aptitude for classroom learning of foreign languages; lower aptitude language learners will typically take longer. Although languages are grouped into general “categories” of difficulty for native English speakers, within each category some languages are more difficult than others.” 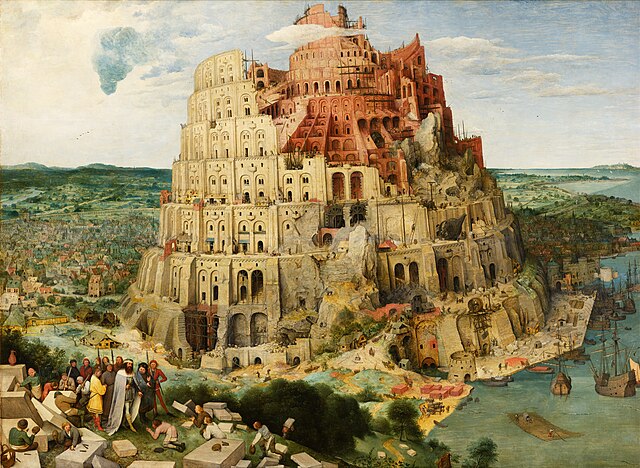 The Tower of Babel by Bruegel the Elder (1563; oil on canvas) [Public Domain]

What matters though, is that there is a sense of a goalpost. So dedicating 10 hours of instructional time in Norwegian means that by the end of 2019, it’s likely one would be within striking distance of S-3 proficiency.

So, we asked some academic colleagues for some tips and software that might help fulfill any resolution to tackle a new language without taking a formal course.

Tip #1: Take up the challenge with a non-competitive friend, even better a non-competitive group. There are now even online communities to develop language skills including on social media.  this is particularly if you are learning a language with a new script and are targeting written as well as spoken proficiency.

Tip #2: Set up a schedule. Like a gym workout, learning a language will work best if you stick to a routine. Some apps will actually help with that.  But they did caution about learning during frustrating commutes. Choose times when you can focus but are not stressed.

Tip#4: Listen to to the language from multiple sources. Avoid a single voice like we might often get in some instructional tools. This is where YouTube and other resources come in. Having multiple voices helps train your ear to hear the words.

Tip # 5: And finally, as they say in German: “übe, übe, übe” or “practice, practice, practice”. With your friend, with yourself, in the car, at the gym- whenever you have a few minutes, use the time to keep what you’ve learned fresh. Eventually, it will become second nature.

We also asked our colleagues about some apps or strategies that have helped them learn languages. The answer was consistent: no single piece of software, no single strategy will do the trick. Each has advantages, and all suffer from a common disadvantage that the language is often presented with limited context. And while some apps provide your with a broad range of learning resources to build a good foundation, one app stood out consistently from the others: Duolingo.

Duolingo is easy to use, available on multiple platforms, offers reminders to interact with the system for a few minutes every day. It is also free; so like all such resources, you will pay for it in marketing. But it is a good introduction to many languages; and as you gain proficiency you might then choose to invest in paid services like Pimsleur or Rosetta Stone.

As for the strategy: anything in the native language- from songs to news- available across the internet from YouTube to SoundCloud to Facebook. Best of all,  meet people  who are native speakers. Their point was that exposure has to be part of the strategy.

We were also curious about what language might be of interest to some of in the Pagan, Heathen and polytheist community.  So, we did a little quick and non-scientific survey among some Pagan friends and asked, what language they would want to learn. As you might expect, the answer broke into professional vs. spiritual reasons. Here is the top list from the first part of our question:

Regarding the spiritual ones, the list interesting and complicated.

The list is challenging, and the offerings limited. We could find some resources for some of them. Duolingo offers Irish, and Welsh; while Icelandic is available on proprietary language systems. For the Yoruba we found various resources on the internet but it is likely best learned from Nigerian language communities or in liturgical form from the African Traditional religious communities.

As for Sumerian, well, we’re stumped, though New York University’s Institute for the Study of the Ancient World gave a us a place to start.