DENTON, Texas — A series of fires were set in the Denton Unitarian Universalist church last Wednesday morning, and the damage was significant enough that the congregation will be holding most of its services elsewhere at least until January. The Yule ritual hosted by members of the Denton CUUPS chapter was an outright casualty, as members determined it would be too difficult to use another venue on such short notice.

Police quickly apprehended a 14-year-old boy who is believed to have set the fires that caused an estimated $20,000 worth of damage. At this time, the suspect is not believed to have been motivated by hate. 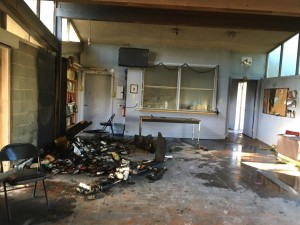 The fires were set sometime between 7:30 and 9:30 in the morning, and were discovered by Rev. Pam Wat when she and her husband were checking on the building. Vandalism had already become an increasing problem at the church. In fact, the night before the fire, someone had been caught on the premises. He fled, leaving his cell phone behind. Although the phone was turned over police, this person was allegedly able to return the next morning to set some fires, causing very real damage.

In a written statement, Wat described the building’s condition:

The damage from the fire is significant, but not overwhelming. The office is largely untouched by the fire. The rest of the building has smoke and water damage. In addition, the sanctuary had two smallish fires that caused some damage, but the more extensive damage was to Fellowship Hall and our religious education classrooms. . . . Some furniture is burned beyond repair. In Fellowship Hall half our library was burned and the other half has water damage. The television was damaged. Structurally the church is fine, but we will have some recovery ahead of us.

John Beckett is the Denton CUUPS chapter coordinator, and the one to break the news that the group’s annual Yule celebration would have to be canceled as a result of the damage. He wrote that it was ” . . . with great reluctance and sadness that we canceled this Saturday’s Yule Circle following the fire at the Denton UU Fellowship. The building will not be usable for at least a week, and a variety of logistical issues would make it extremely difficult to relocate this ritual to another location, or to hold it in the front yard of the church.” He then went on to explain some of the reasoning behind that decision:

Some friends have suggested that we do it anyway, even if all we can do is gather in the parking lot and sing a song of defiance in the face of adversity. While we admire that resolve, it simply isn’t doable for us at this time for a variety of reasons, some apparent and some not.

Our sacred space has been desecrated by intentional violence – the building is not the only thing that’s been damaged. On Saturday evening, CUUPS members will hold a private gathering where we’ll talk about what’s happened and how we want to respond. We would prefer to be leading a public Yule circle instead, but this is something we simply must do.

An assessment of the damage in the days since has church leaders suspecting it will cost more than initial estimates of $20,000 to repair the building entirely from the smoke and water, which did most of the damage. Even when the work is complete, some of the books which survived will likely carry the smell — and reminder — for years to come. As the church carries a high-deductible insurance policy, and the 2016 budget is “already tight” according to Beckett, a fundraising effort has been launched to cover the difference, including a “donate” button on the church web site. No information was immediately available on how much has already been raised.

There is some sense of relief that the teen apprehended almost certainly didn’t target this particular building for ideological reasons, but some unease, as well. Beckett wrote, “This was not his first incident and we are not his only victims. He appears to be a deeply disturbed young person. He has already gone from breaking windows to setting fires –- this is a pattern that frequently leads to hurting animals and then people. Our hope and prayer is that he can be helped before he goes any further down this path… and that until then, he can be compassionately restrained.”

Beckett also wrote about how CUUPS members spent the time that had been reserved for a Yule ritual around Baldur and the mistletoe.

We’re thankful it wasn’t a hate crime, but at least a hate crime would have given us a target for our anger. In the end, we agreed this is a good example of the fact that not everything “happens for a reason” -– or rather, sometimes the reason is just that you’re in the wrong place at the wrong time. . . . when the repairs are finished (probably in early March), we’re going to hold a public ritual and invite representatives from area Pagan groups to help us reconsecrate our sacred space. We’re going to make room for our long distance friends to participate too –- we want as much “juice” going into this ritual as we can get. . . . Our matriarch led us in a guided meditation for healing, after which we performed a group ritual to mark the close of the solar year and to banish the harm this year has brought.

To be thankful that a devastating fire was just a random act of vandalism rather than a targeted act of hate can feel a little bit like letting evil win, but Beckett chooses to see it differently. As he posted on his own Facebook page, “I am extremely thankful for the outpouring of sympathy and support we’ve received since this happened on Wednesday. It is at times like these I’m reminded that despite all our differences, the Pagan community is a community.”