Across many different cultures, lands and religions, honoring the ancestors of blood, bone, and of spirit is a common practice. Ancestral practices are very common in many Pagan practices during the month of October, honoring the thinning of the veil and the various traditions of the final harvest of the year. The Witch’s New Year, Samhain, the death and dying of the harvest season are all celebrations that of the turning of the wheel, and celebrate the Mighty Dead.

While celebrations and ceremonies vary by culture and tradition, the power of this time is electric and brings about much excitement and worship.

Lilith Doresy, author of the Voodoo Universe blog on Patheos Pagan Channel, recently wrote about some ancestral recipes, where she wrote, “Among the Yoruba peoples of West Africa the ancestors are honored as Egungun, while in Haiti the dead are often revered as Les Barons and Les Gedes, in Mexico they are honored as the Muertos, but no matter where one is located , prayers are offered up daily to give thanks to those who have come before. Always present in the blood that courses through our veins, and in the ground on which we walk, the ancestors are venerated in many different spiritual traditions.” Many cultures, practices and associations for this time of year connect to the ancestors and acts of ancestor reverence. Christopher Penczak, author and the founder of the Temple of Witchcraft, recently  answered some questions about the Mighty Dead and his own practice of ancestor reverence during this time of year.

Who exactly are the Mighty Dead?

Though the term has been used to refer to any of our spiritual ancestors of note, such as founders, teacher and authors, I use the term Mighty Dead to refer to the “enlightened” ancestors of the Witchcraft and Pagan traditions. They are those who passed on with a state of awareness, of spiritual “might” that they can step of the cycle of rebirth and incarnation. They are akin to the Saints of the Christian traditions and the Bodhisattvas of the Buddhist traditions.

Why is ancestor reverence an intricate part of your spiritual path?

Ancestral reverence is important because we are all connected. What happens in the past influences us now on all levels, and we inherit both the gifts and difficulties of those who come before. It also helps us make peace with the fact we too, will be ancestors one day. And working with the spirits who have gone before helps us find allies, healers and teachers who understand what its like to be incarnated, because they have lived in this world too.

What is your favorite way to honor the dead at this time of year?

I like to keep an ancestral altar all year round, but at this time of year, i pay particular attention to it, making offerings, sitting and talking with the dead and sharing, as if they were here with me physically. My own practice tends to be very shamanic or vision based, and i enter into trance to visit with the ancestors and receive wisdom and simply stay connected, like visiting the family on the earthly plane.

The wide practices and cultures of ancestor reverence are diverse, yet all bring passion, connection, and respect to the practice of spirituality. And while not all Pagan paths include this element of worship, there are many that do. Some revere the Mighty Dead as Penczak referenced, while others include their ancestors of lineage into the equation. Many different beliefs bring about many different types of practices.

In celebration of this time of year, some people have chosen to share pieces of their practices or pictures of altars, expressing why this time of year is important to their spiritual practice. 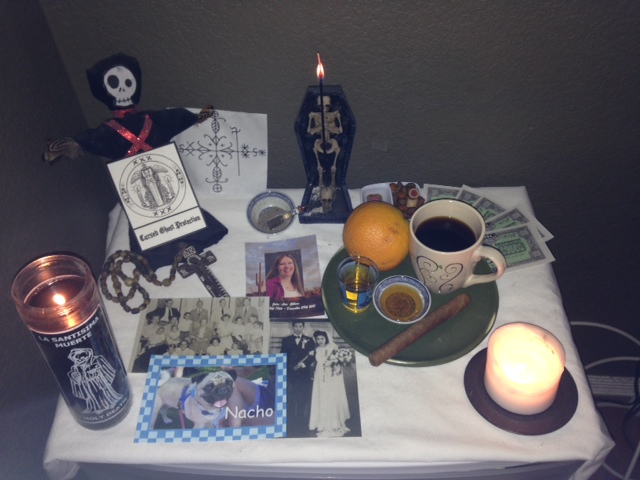 My altar includes pictures of my great grandparents & various other dead relatives, my husband’s grandparents, a professor from my work who committed suicide a year & a half ago, and our pug Nacho Libre. I have incorporated elements of my husband’s Chinese heritage, as well as, my more African influenced Paganism & and former Christianity. My (our) ancestor altar is special to me because it is a way to honor my husband’s cultural heritage, where they really respect and value the practice of honoring the dead, sending them money and prayers in the afterlife, and thanking them for their protection of our family. It is also a spiritual piece for me because I always call my ancestors into circle when I am having a ritual or doing any kind of magick. I believe the ancestors bring me wisdom, experience, and keep me company during my rituals. They also protect me and my family, so an altar dedicated to them is a way for me to say thank you.  My ancestor altar is just another place for me to stop, reflect, and to offer up prayers And last but not least, my ancestor altar is/was a way to help me emotionally heal after our dog Nacho Libre unexpectedly passed away. We keep a picture of him, as well as, a small bowl of dog food, treats, & water (next to the offering plate). I love the symbology of this! I am a Pagan witch and animal rights activist (vegetarian), and placing my dog’s photo with my ancestors is a bold way to say I believe my dog is my family, that he has a soul, and that he is just as valuable as my human family members. I would like to believe that the Goddess is looking over my Nacho in the afterlife just as much as my grandparents! – Hoi Sum, Priestess and Doula Well….first and foremost I practice Spiritualism which is the communication with the dead. It is part of who I am and cannot separate myself from what I am because the dead are always with me…my ancestors are my guides, who are also the dead from previous lives and the energies that other people have. So it is absolutely intricately connected to not only my spiritual path in Santo(Santeria) but also to my very existence as a live being. This is as very real as I live and breathe it. It is part of my essence… my ancestors. The live in me through historical memory and my DNA. I go to them and the orishas for guidance about the decisions in my life because I’ve accepted that my place in the universe is by them and because of them, and every day and every thing I do is a testament to them their love and their presence. Every day I try to honor them through rituals of food, drink, smoke, and spending time with them.

Time is hard to give. But regardless I always work st connecting with them and listening to them. They are my muertos, my dead. I love them. – Nsasi Vence Guerra, Writer and poet 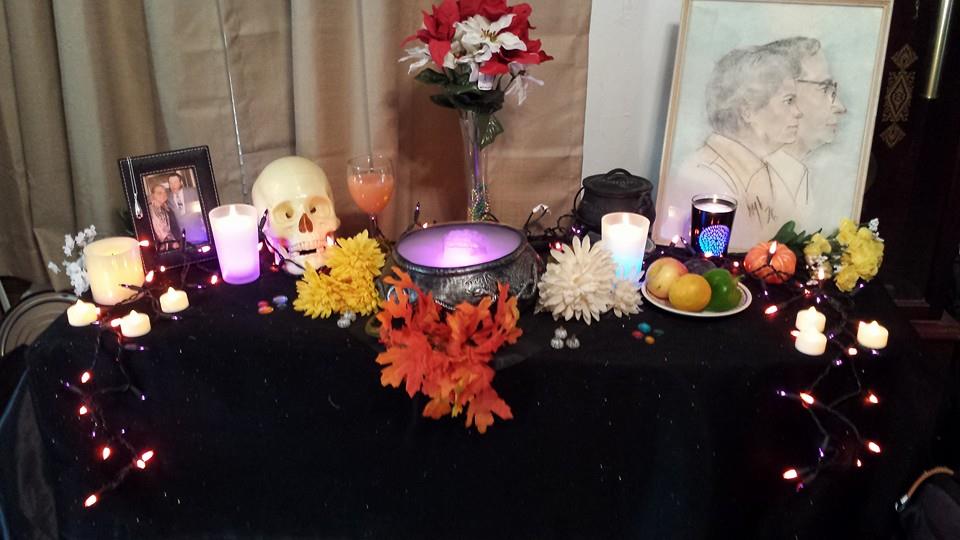 Leaann shared a picture of her recent ancestor altar with pictures of her mother, father, and grandparents. She also has poinsettias on the altar, as her grandmother’s favorite flower.

Being half Czech gypsy and half mestizo Aztec, my ancestors have always been a very important part of my life. And this is not only because I am a sensitive and see the dead around me. My cultures have always made the dead incredibly important in worship – whether it be the Sedlec Ossuary my ancestors built, quite literally, from their ancestors (after being forced to convert to Catholicism, they found a way to continue their ancestor worship by insuring that Rome knew exactly where the foundation of their faith lay), to Dia de los Muertos, a tradition that was traditionally a month-long event that became a one-day holiday to coincide with All Saints, but remains incredibly important to my culture. I worship my dead every day through healing and spiritual arts passed down to me, through items that surround me year-round, and through asking them for guidance, as I would the Lord and Lady. But in October, the heightened energy allows for a closer connection. I often will see my dead around me, instead of just feeling or smelling their presence. And with their power to appear amplified, so is my power to communicate. And thus, I take the opportunity in October to reaffirm my dedication to my ancestors and almost like a western New Year’s resolution, I dedicate my year to them with plans and goals. Because, after all, this is the beginning of the wheel. – Jelen VanderYacht, Writer and Priestess

From recipes to offerings, rites to celebrations, there are many different ways to honor those who have come before and crossed over to the land of the dead. 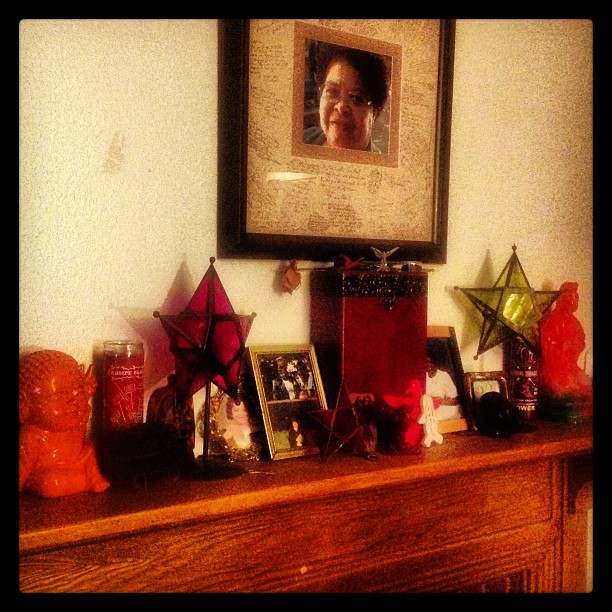 In my home we honor our ancestors with a year around altar of pictures, statues, offerings and the remains of my now deceased mother. We cook familial recipes, and continue specific traditions of those we are honoring.

It is such a magical time to continue the traditions of our families and loved ones, to honor and celebrate their continued contributions, and to show respect for the messages of wisdom and connection.

For additional ideas or information, here are a couple of links.