NEW YORK –A replica statue of a goddess sometimes equated with Athena, destroyed in Palmyra in 2015, is the centerpiece of an exhibit on display at the United Nations headquarters. While the destruction of that historic Syrian city by members of Daesh led to near-universal outrage, the display of this and other reproductions is not without controversy of its own.

When Daesh troops occupied Palmyra, they set about on a systematic destruction of all traces of that city’s Pagan history. They accomplished this with brutal efficiency, using hammers and explosives to accomplish the task, which was carried out in August 2015. Violence was also part of formula; Khaled al-Asaad, head of antiquities there, hid many valuables and died rather than disclose where they were.

The World Heritage site has sustained considerable damage during the fighting that year and through to earlier 2017.

Decried as cultural destruction by many, the attack on Pagan holy sites were felt more deeply and personally by some polytheists and Pagans. News of what has been termed “the most heinous non-lethal crimes” perpetrated in the name of Daesh moved one polytheist, for example, to commemorate the city and its gods in jewelry.

Ellen, which is all the name she was willing to share, fashioned a number of pins which included depictions of the city’s main temples to be used both as reminder of the erased history and mini-temples to remember those deities. She distributed them for free to those with an interest carrying on that work. One of the other ways that this destruction is being mitigated is with 3D printing. An analysis of thousands of images of destroyed artifacts has made it possible to use the technology to create copies of the originals. A reproduction of the Palmyra Arch was unveiled in Trafalgar Square in 2016, and now an exhibit at the United Nations entitled “the Spirit in the Stone” includes a number of other artifact copies, among them the arch and a goddess statue, the original of which was partially destroyed in the Palmyra Museum.

The statue was believed to represent the goddess Al-lāt, one of the pre-Islamic deities worshiped in the region; the figure likely was first associated with Athena when the city was under Roman rule. As with the entire exhibit, the statue’s creation resulted from a collaboration among Dubai Future Foundation, the Permanent Mission of Italy to the United Nations, and the Institute of Digital Archaeology at the University of Oxford. Whether Al-lāt or Athena, the statue is the centerpiece of the exhibit.

While Roger Michel, executive director of the Oxford institute, is quoted as saying that “for thousands of years, Athena was synonymous with reason, refuge and the rule of law all of the same values on which that historic institution was built,” critics note that she is also a war goddess. 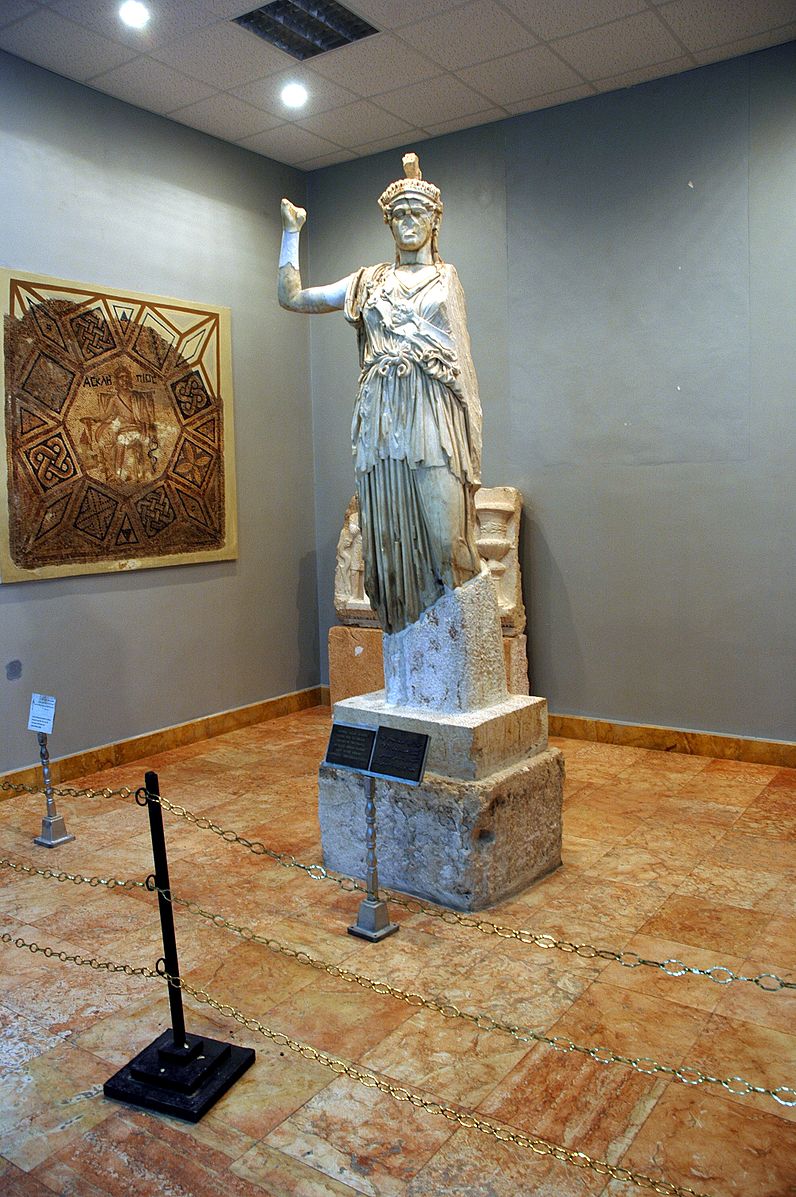 Athena/Al-lāt statue before its head and arm from removed in 2015 [Wikimedia Commons].

It appears that the negative feedback about the exhibit has an Abrahamic bent, with a story in Breaking Israel News being quoted in most versions. In that article, a rabbi interviewed discussed why the display of Pagan symbols is problematic in his view: “Paganism creates the ability for each man to create his own truth, as opposed to Judaism and Christianity, which state that there is an objective truth man must abide by. The UN, like paganism, is a place of subjective reality created by a vote.”

Echoing both that concern and the position of some Abrahamic theologians that this exhibit is part of a prophesied “end of days” are writers holding other extreme values, such as the unnamed editor of White Nation Network, who believes that the statue is part and parcel of church corruption that can also be seen in the Maltese cross and pine cones that appear in some Christian iconography.

What’s striking about reaction to this exhibit is that it both evokes outrage against religious extremism and outrage from religious extremists. Destroying the past goes too far for many people to accept, but reproducing those Pagan artifacts for display in a modern context also pushes the envelope of acceptability.

The preferred way forward for those opposed appears to be one that allows the past to be remembered, but remain in the past; that’s a mindset which is not likely to sit well with contemporary polytheists, Heathens, and Pagans.