Having, for the moment, concluded my own pilgrimages to some of the places that Pagans feel sacred, I have been spending my time looking back at what others have thought about pilgrimage as a concept.The anthropologists Edith and Victor Turner claimed that the key feature of pilgrimage was something called communitas. Pilgrimage, they said, brought the pilgrims into a “liminoid” state, a state of being “betwixt and in-between,” outside of the normal bounds of societal rules and hierarchies. (This state is “liminoid” instead of “liminal” because in the contemporary Western societies that the Turners studied, pilgrimage is generally something people choose to do, rather than an obligatory rite of passage for the community; obviously this is not always the case, even in said Western, mostly Christian societies, but the Turners’ model focuses on pilgrimage as something optional rather than mandatory.) While engaged in this liminoid state, pilgrims enter into the state of communitas, wherein individuals become subsumed into homogeneous groups based on their shared “lowliness, sacredness, and comradeship.”

For the Turners, pilgrimage was a kind of radical egalitarianism, where, through the power of religious ritual, the structural bonds the divide society could be dismissed, leaving all pilgrims as an unmediated, undivided throng. This was, of course, a passing state of affairs; eventually the pilgrim returns home and reintegrates into the structures of society, with all the old hierarchies intact. Indeed, communitas, which the Turners also referred to as “social antistructure,” often ended up reinforcing the very structure it critiqued by acting as a sort of pressure valve for the greater society.

The Turners and their theory of pilgrimage as communitas have hardly been universally accepted in the field, it must be said: the scholars John Eade and Michael Sallnow have questioned the idea altogether, noting that in numerous anthropological studies of pilgrimage, the anti-structural quality of communitas was found to be nonexistent. Instead, pilgrimages have been argued to actually reinforce prior hierarchies and social distinctions, not just by giving pilgrims a space to relieve themselves temporarily of the pressures of their typical lives in societal structures, but by giving those societal structures new arenas to contest against one another. Despite these critiques, the Turners’ communitas has remained one of the major academic understandings of pilgrimage. I derive much of my own understanding of pilgrimage from my own experiences traveling to places sacred to me: Thingvellir in Iceland, Stonehenge in England or, closer to home, the Gaea Retreat outside of Kansas City. In visiting these places, I’ve had my own experiences with communitas: I’ve been welcomed by Heathens and Druids, drawn into the circles of witches who, despite my being a stranger to them, accepted me into something like the Turners’ state of community. As a Pagan, the experience of this communitas has been a powerful experience; these moments of generosity and hospitality are the moments I most feel as though I am part of something like a “Pagan community.”

But as a writer, I’m fascinated by the fragility of communitas, the tension it brings between the individual pilgrim and the communities she encounters. Many writers of pilgrimage travelogues describe the conflict between maintaining the self-reflexive critical perspective of the individual — the voice, indeed, of the author as an autonomous thinker — and releasing herself into this undifferentiated community. What the Turners think of as a blessed, lovely connection, many writers seem to find a kind of ego-annihilation; to become part of the communitas is, to some extent, to surrender one’s own conception of the self. On the other side of the coin, to exist outside and apart from the structure of society, the pilgrim must belong to an exclusive group: another form of societal structure and hierarchy, one that many pilgrim authors struggle to conform with. 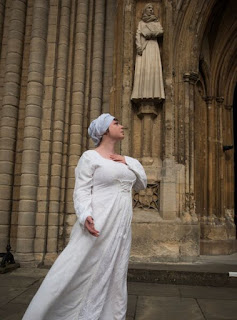 Joanna Swan portraying Margery Kempe for the play “Margery Kempe, the Wife of Lynn’s Tale” [Bard on the Wire blog].

One of my favorite accounts of such a pilgrim’s struggle is The Book of Margery Kempe, a medieval text dictated by Kempe herself that describes her life as a would-be mystic in 14th century Norfolk. Kempe describes herself as an odd figure, constantly visited by the presence of the Christian god and reduced to tears and uncontrollable emotion by that presence. Normally one would think of such mystic visions as occasions for high theological drama; witness Kempe’s contemporary, Julian of Norwich, whose spent decades as an anchoress contemplating her own surreal visions of that god, and whose fame spread far enough to attract visits from pilgrims of her own. (Margery was herself one such visitor.) But when Kempe describes her travels in the Holy Land, her visions of her god make her more of a nuisance than a miracle to those she is supposed to being entering into communitas with:

“[After a visitation from her god] she rode on an ass to Bethlehem and when she came to the temple and to the crib where our Lord was born, she had great devotion, much speech, and dalliance in her soul, and high ghostly comfort with much weeping and sobbing so that her fellows would not let her eat in their company. And therefore she ate her meals by herself alone.”

It doesn’t get any better for poor Margery. For the duration of her pilgrimage, her fellow pilgrims shun her because of her outbursts; they refuse to let her come with them to the River Jordan (though she goes anyway) and later refuse to help her climb the mountain where Christ reportedly spent his 40 days in fasting. Kempe is forced to purchase the aid of a Saracen in order to see the sight. When the pilgrims begin their trip back to England, they abandon her: “And when our Lord had brought them again to Venice safely,” she writes, “her countrymen forsook her and went away from her, leaving her alone. And some of them said that they would not go with her for a hundred pounds.”

The first time I read The Book of Margery Kempe, I couldn’t help but mock her. She, after all, spent her time consumed by weeping and moaning; I imagined myself in the shoes of her fellow pilgrims, who had come to the Holy Land to see the sights and maybe have a nice, mild religious experience, who were instead constantly confronted by this person who just could not stop being visited by this god. If my friends acted that way I might abandon them in Venice too. But the more I read the book, the more sympathy I feel for Margery. She, after all, achieved what we’re all supposedly trying to achieve when we go on pilgrimage: to come to somewhere holy and have it live up to our expectations of the divine. She was denied communitas because she herself got too close to her god. Beneath the crying and wailing, there is a deep irony there, one I am thankful I have not yet experienced myself.